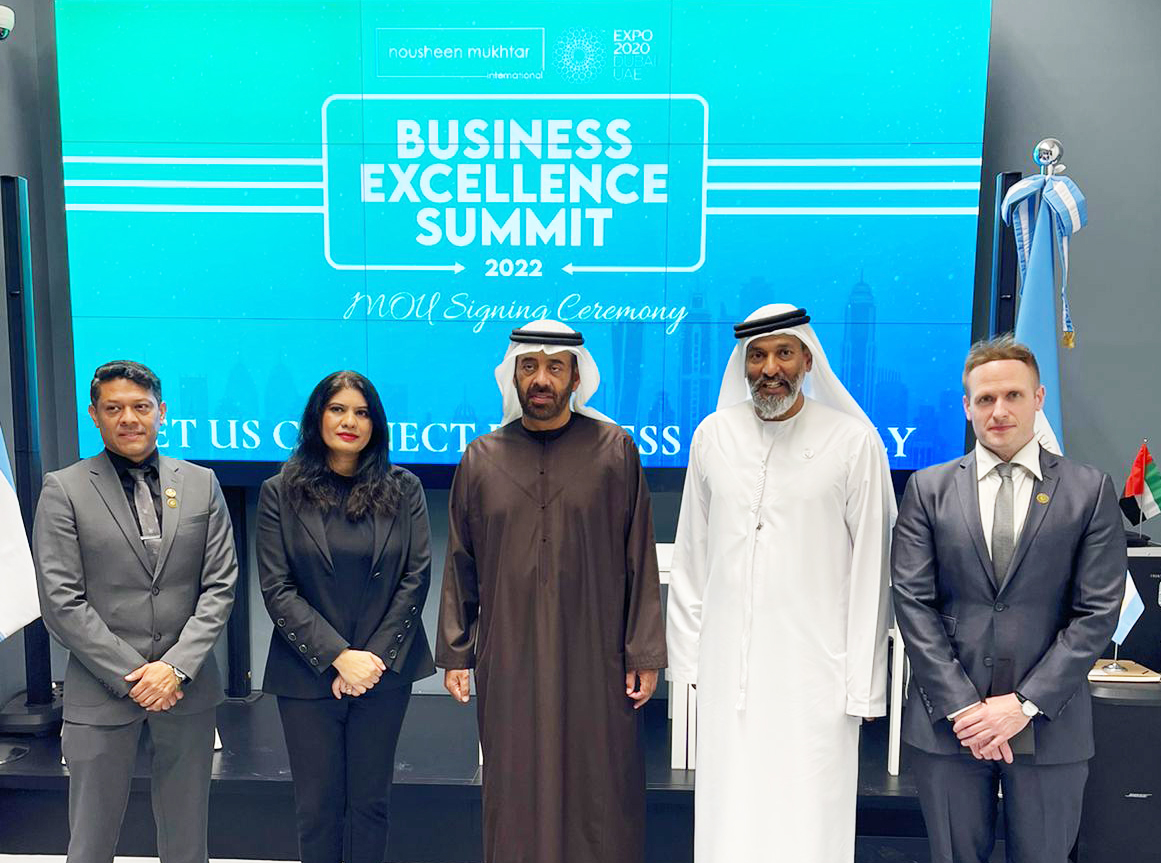 Business Excellence Summit, organized by Nousheen Mukhtar International, concluded on February 10, 2022 on a high note on business development, connectivity and growth. Numerous leading companies from technology, health, trade, finance and other sectors joined in the summit with dignitaries and delegates from multiple countries participated in this event. The summit spanned on a program for two days including an event in Expo 2020 Dubai and a conference held in Dubai.

The first day of the summit at the Argentina Pavilion in Expo 2020 sealed stronger ties between Argentina and the UAE. An MOU has been signed between Argentina and the UAE for future trade and business flow. The MOU for Latin America Business Center was signed by Twenty 2 LLC represented by H.E. Sheikh Salem Balrakkad Alameri and CEO Rashid Alameri with Dr. Chris Meniw and CEO Henry Hoyos from Argentina and Bolivia respectively. The Dubai Latin America Business Center will have H.E. Sheikh Salem Balrakkad Alameri as its honorary chairman and Mr. Rashid Alameri as its CEO. It will support formation of private companies in Dubai and offer multiple opportunities to the emerging talent from Latin America for investments and business growth.

Argentina pavilion hosted a historic moment with another MOU signing ceremony between Nousheen Mukhtar International represented by CEO Nousheen Mukhtar and Dr. Chris Meniw representing The Esports Planet a company of Javier Mascherano. This event took place under the patronage of H.E. Sheikh Salem Balrakkad Alameri and guidance of CEO Rashid Alameri. According to the official press release by the Ministry of Foreign Affairs, International Trade and Worship Argentina, “It is worth mentioning that this agreement is part of the growth plans of the Esports Planet company and has the objective of establishing an office in Dubai, with the aim of becoming a major center of eSports activities in the region, through the establishment of leagues and tournaments, starting with virtual football”. The presence of Esports Planet in Dubai will engage the sports fans in the region in more than one ways and strengthen the ties between Argentina and the UAE.

The second day of Business Excellence Summit 2022 spanned on a conference that aimed at leveraging business networking among various business sectors in Dubai. Chairmen, CEOs and founders of many companies participated in this conference. Thought leaders including CEO Nousheen Mukhtar, Dr. Chris Meniw and Henry Hoyos shared their views about global expansion of business.

I am Ayesha Zulfiqar a digital copy writer. I write to educate, motivate and bring positive change to my audience. Priya M Nair – A Committed Entrepreneur, The Founder of zwag