Feminism for all the genders - Stylfemina

Feminism for all the genders 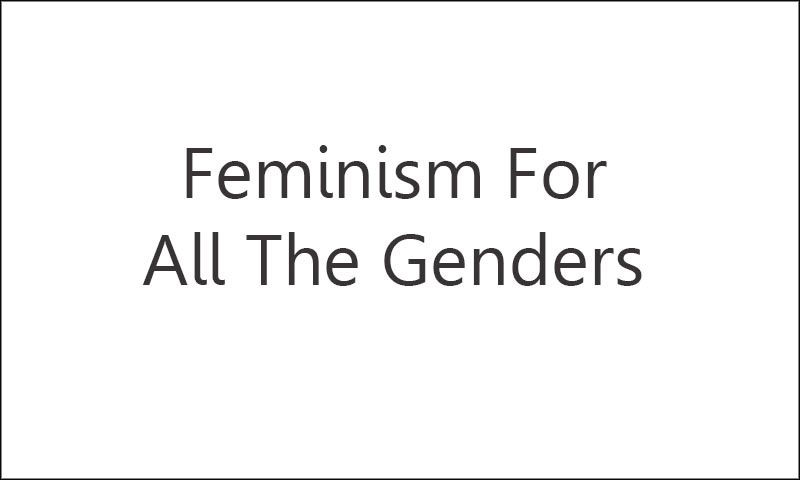 A few days ago, I had an intriguing conversation with a friend/occasional frenemy. He and I have had countless debates about feminism in the past. Although, he and I both agree that male dominance is still prevalent in almost every facet of the society. However, to his dismay, the new age feminists often transmit heat to the ‘good guys’ and do not consider the flaws of their own gender. His examples include cases where women were ‘gold-diggers’ and married rich men for money, the gender bias amongst women and the stereotypical relationship between mother in law and the daughter in law. To his point, even in today’s world men are expected to take care of women’s finances and men are often under constant scrutiny due to the fictitious social norms.

From my perspective, the bottom line of his tirade was that patriarchy is more harmful than beneficial in this conceptual age. With the changing economic conditions, one income source cannot support the entire family therefore, women need equal pay and must work to provide some sort of family support. Similarly, the masculinity standards are highly unfair, to an extent they forbid men to showcase their emotional side and compel them to suppress their feelings, which ultimately leads to disastrous outcomes.  Moreover, according to Philippe Leonard Fradet, author of Everyday Feminism; the unrealistic masculinity expectations forbid men from achieving the self-actualization level and they often suffer from lack of self-esteem and/or self-love. From an early age, boys are taught to “man up.”  Which mean being vulnerable, crying or showing so-called weak emotions are against the teachings of virility and depicts the signs of a weaker gender. Such doctrine does not allow reflection and endorses negative feelings of violence and hatred.

Unfortunately, even today many women are taught that men are breadwinners and their goal is to make a man’s life better by concentrating on being only a dutiful wife and a good mother. Such teachings simply add fuel to the fire. Thus, at an early age woman are brainwashed into accepting their inferior role in the society and for them landing a good (rich) husband becomes their only ambition. This situation is worse in the third world countries, where women are considered as a burden. Even today, the birth of a female child is considered a curse than a blessing. Maybe that is the reason the dowry system still prevails, and women are subject to violence both from the same gender and the opposite.

For those who are still confused, feminism simply advocates the equality of all the sexes. Believe it or not, this phenomenon is better for men. After all, there must a solid reason that Justin Trudeau, the handsome Canadian Prime Minister is a proud feminist. “All of us benefit when women and girls have the same opportunities as men and boys – and it’s on all of us to make that a reality,” he wrote in an essay for Marie Claire magazine. “Our sons have the power and the responsibility to change our culture of sexism.”